The Fort Vancouver Pipe Band is grateful to be funded, in part, by a grant from the Washington State Arts Commission with additional support from the National Endowment for the arts.

It is the goal of the bagpipers and drummers of the Fort Vancouver Pipe Band in Vancouver, Washington, to promote Scottish pipe band music and Celtic culture through public and private performances.  Band members are also committed to providing the opportunity for others to study the playing of the Great Highland Bagpipes and Scottish pipe band drumming.

The Fort Vancouver Pipe Band has played in parades, at Highland games, at concerts, and for many types of special events. Individual pipers or the full band have been hired for funerals and weddings by arrangement.  If you would like to book the band or a piper for your event, contact our event coordinator. You can do that through the contact page, or by emailing direct to ampmcomm@msn.com, and let us know if you’d like a return phone call or email.

If you want to find out more about our music, and listen to some past video clips, go to the Music page on this site. 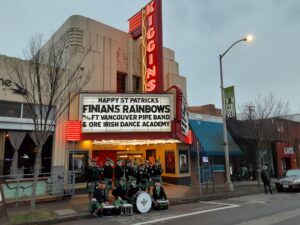 Learning to play the pipes or drums

We invite everyone who loves the bagpipes to come learn to play the bagpipes or drums and join the band.  We have learned our instruments, so you can, too. Initial lessons both on pipes and drums are provided by experienced band members, and are offered for free during our regular band rehearsals. You can hear some of our tunes on the Music page. Our hope is that as you progress in your instruction, you will want to join the band and continue to grow musically. Contact us through the Contact Us page to get started.

The band is a 501(c)(3) certified organization.  Donations are tax deductible.

When formed, the Fort Vancouver Pipe Band stated its mission to be: to promote the music, dancing, and the  military traditions of Scottish and Irish culture, to preserve the memory of the Hudson’s Bay Company and those who contributed to the colorful history of Fort Vancouver and the Pacific Northwest.