Below are some clips of tunes played at a concert held January 5, 2019.  We will try to add in other clips when they become available. 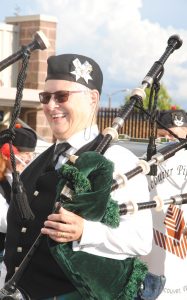 The Fort Vancouver Pipe Band is under the direction of Pipe Major Victoria MacKenzie.  The pipe major leads the band at all performances and makes decisions on the musical selections.  Use the Contact Us page to make inquiries about the band appearing at your special event.  The pipe major can make recommendations on the type of music that the band plays that may be appropriate.

Under the direction of Pipe Major Victoria MacKenzie, the band plays many traditional and familiar pipe tunes, and those that may not be as familiar, but are sure to get your toes tapping or make your heart skip a beat. The pipe major introduces new selections each year, which the band members learn over time.  Most of the time you will hear two or three tunes played together in sequence, which is known as a set.  Sets can be changed, with one tune exchanged for another.  Competition sets of three tunes are labeled as a medley, or as a march, strathspey, and reel (MSR).

Pipers who play for solo performances can play these or other tunes that they may have learned.  Go to the Contact Us page if you need a piper or the band for a special performance.

Cock of the North

Retreat Set:  Green Hills of Tyrol (A Scottish Soldier), The Battle is O’er

Set:  Battle of the Somme,  The Heights of Dargai

Set:  The Bells of Dunblane, Bloody Fields of Flanders